An ambitious investment program was launched in 1999 by Aéroports de Montréal (ADM) to enhance the quality and functionality of the facilities at Montréal-Trudeau International Airport. The objectives of the program were to improve the quality of passenger service and the efficiency of operations for carriers and other ADM partners, as well as to increase the efficiency of international, transborder and transit passenger processing through the design of new world-class facilities in a context of an ever-changing air transportation market, an aging population and changes in airport security. Implementing such a project in an active airport environment presented significant challenges. The design of the new international and transborder piers was carried out in a first phase from 1999 to 2005, while the new transborder departures area was completed in this separate second phase from 2005 to 2009. 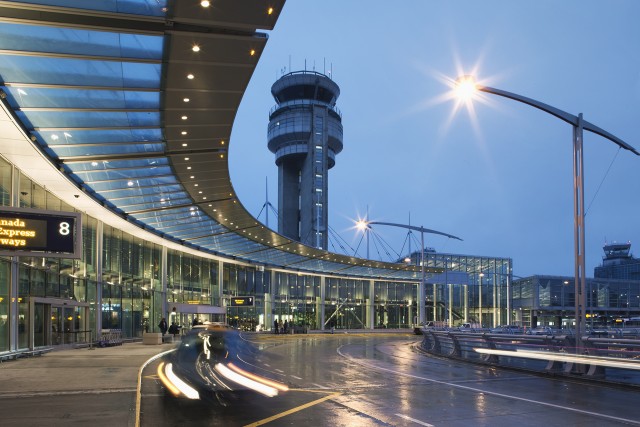 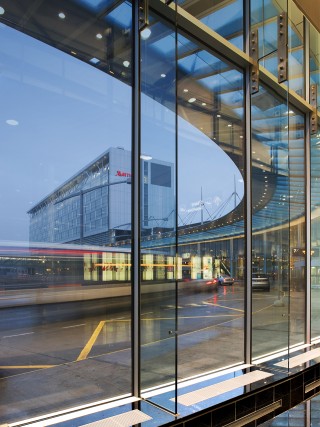 The project addressing the international departures section (2005-2009), built in an extension of the connection terminal, consists of a baggage claim on the main level, as well as a check-in hall, a point of inspection, and a customs pre-clearance zone on the floor. On the next levels, a top-quality, 275-room hotel, completed by an independent consortium. In the basement, a 500 vehicle underground parking lot allows for the cost amortization of the construction envelope of the future railway station. The elongation of the exterior drop-off zone toward the new departure area is also included in the project.

The architectural approach of this project was perceived with particular attention to the treatment of the glass surfaces used to create the new airport facade. This facade, which is the full length and twice the height of the international departure hall, has incorporated new technologies in glass manufacturing to achieve transparency. The new unit for the future rail shuttle, connecting with the existing airport, is consistent with this design, as glass is used on the whole of its surfaces - walls, ceiling and floors.